We are super excited and proud to have received an Award of Excellence for website development at the 2016 BMA Lantern Awards. Forthea won the award for a microsite project we launched for a law firm client, completed this year.

Forthea presented a litigation law firm client with a campaign strategy to increase NCAA concussion plaintiffs. The law firm had a NCAA landing page, which wasn't generating much traffic or ranking in search engine results. The competition to corner market share with this lawsuit was heating up and the law firm wanted to secure its position as a go-to resource for plaintiffs.

"After two months, the microsite generated a 342% increase in year-over-year organic traffic and a 404% increase in goal completions as compared to the NCAA landing page on the company's main website."

The goal of the microsite was to educate potential plaintiffs and their families about the severity of concussion injuries, inform them of potential future complications and define an athlete's eligibility for financial reparations. The time frame to present the site was three weeks, which was completed on time and within budget. Measurable results would be presented within 3-5 months. 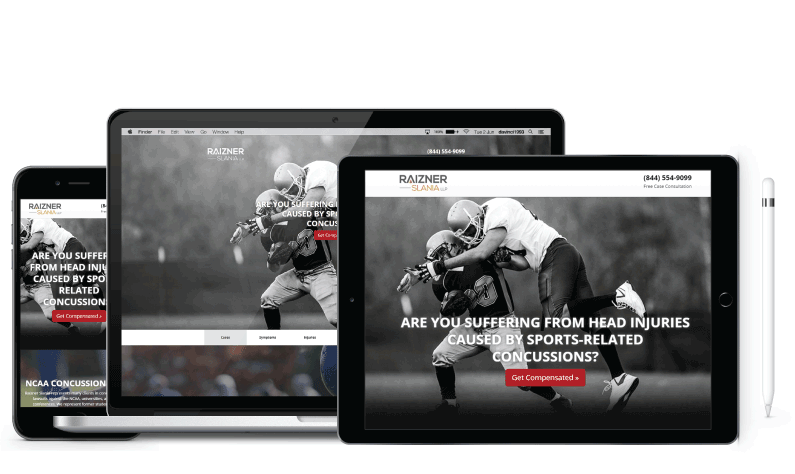 The law firm represents plaintiffs in complex injury litigation. College athletes that endured concussions with lasting health implications could be eligible to file a lawsuit for financial reparations.

In newly filed cases, the NCAA concussion plaintiffs are claiming that universities, conferences, and the NCAA were all negligent in handling head injuries. They are now seeking financial compensation for concussions sustained in their college athletic careers.

Forthea incorporated high impact imagery with interactive elements and well-placed calls to action (CTA). The goal was to keep readers on one page but divide the information into distinct sections. Designers included animated elements and image carousels to illustrate brain trauma and potentially long-lasting brain damage. An accordion element was created to provide frequently asked questions (FAQ). The sticky navigation keeps the navigation in view as a user scrolls or jumps between sections. The sections are built on parallax to provide a visually pleasing transition between sections and maintain a football-centric theme. View the microsite here.

Our team put together an analytics presentation after two months. The microsite was generating a 342% increase in year-over-year organic traffic and a 404% increase in goal completions as compared to the NCAA landing page on the company's main website. 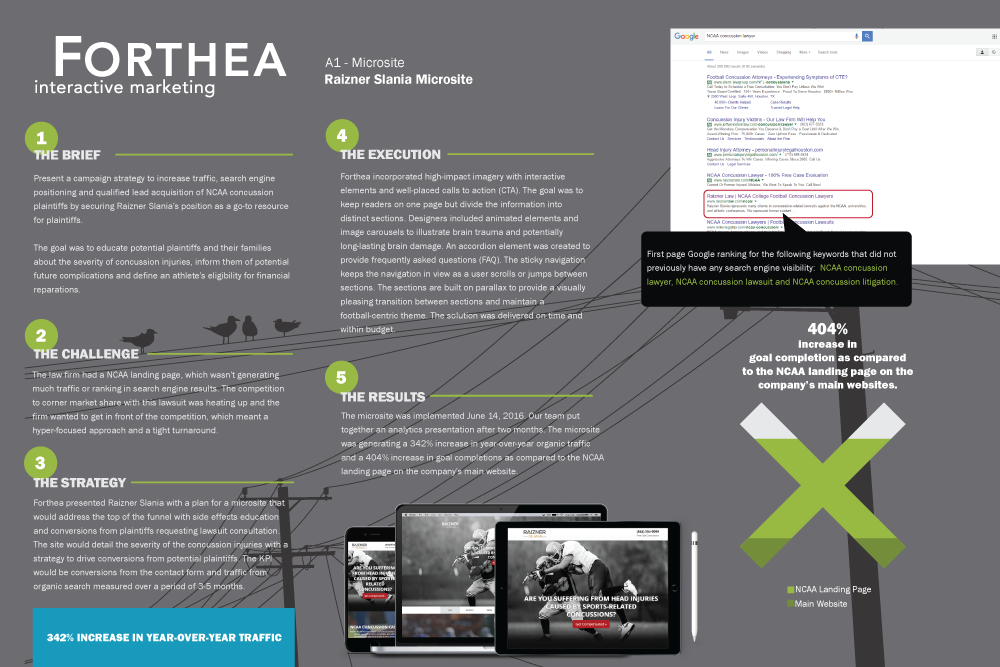 Holly leads the strategic and creative direction of building and managing the brand of the agency, demand generation, and pipeline forecasting. She specializes in account-based marketing, digital marketing, analytics, and customer engagement. Holly brings over a decade of omnichannel marketing experience with a background in technology and business services industries.

Read Bio
Help! I have a Quick Question.
Providing Expert Service in Texas